How Do I Write a Descriptive Essay?

How Do I Write a Problem-and-Solution Essay?

How Do I Write a Descriptive Essay? Part Two

Whatever it is that has been given to you or chosen by you to describe, you know now, from your reading of the first part of this article, that you should employ all your senses, as well as your emotions, your analytical thoughts, and your spiritual perceptions.

The difficulty arises when you have to put these observations into words. Here you have to avoid the bland description that will bore any reader and especially your teacher to tears. In describing the approach of a storm, you do not want to do this:

It was a warm day. There were a few clouds in the sky in the morning. It was going to be another one of those long, hot, and dry summer days. The weather forecast confirmed this. There was no prediction of a storm. The birds sang sweetly. A turkey-vulture flew in the blue sky. By the afternoon there were a few more clouds, and a wind had sprung up. Later, the sky in the northwest had turned dark with heavy clouds. The wind was stronger too.

There is an attempt here to use the senses to create a picture, and the reader can get a reasonable mental image of what is happening, but it needs so much more to make an impact. Besides the choppy style, it is too bland. Let’s take the same idea and give it the muscle that it needs to make it live in the reader’s mind:

I looked down at the ground. A curious beetle moved closer to a cleft and tumbled into it for further exploration. Several of these deep cracks, the yellowed lawn, and the dead leaves told the woeful tale. An out-of-the-ordinary Lombardy Poplar, which had spread its lower branches far outward at a hundred-degree angle to the ground, offered some shade that morning as I sat under it surveying the drought’s toll. My antiperspirant had already worn off! It was good that I was alone, so it did not really matter.

One mockingbird–a little drab in its gray coat–chose a branch on the other side of the poplar to perch on to display its musical talent. Its imitations of the local bird population were not unwelcome. The occasional locust nibbled away at some of the poplar’s leaves. How unfair, I thought. This tall tree was struggling to keep its meager foliage as it looked down at the exhibit of its former leaves that had turned gold and brown in a pseudo-autumn show.

A turkey-vulture circled far above me and perhaps wondered if there would be more prizes arranged for it by courtesy of the drought. We needed rain. The meteorologists blamed our predicament on the impenetrable high-pressure dome that had settled over us for several weeks, and there would be no rain for at least another week. 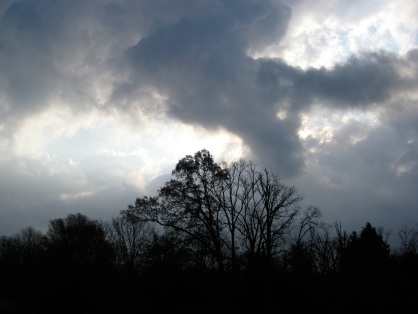 I had not noticed the darkening sky to the northwest since I had my back to it. The poplar started to speak in its crackly voice as its leaves began to move. It chattered gently at first, but then it spoke louder and louder with a flurry of excitement. An unfettered something clattered away on the west side of the house. A welcome rumble, a distant flash, and a few spots of moisture played harbinger of a relief that had not been foreseen. I bowed my head in silent thanks and wiped away a drop on my cheek. Was it from above? Sheltering indoors, I watched the deluge and appreciated the strains of Beethoven’s Pastoral Symphony on the radio. Was that the mockingbird giving thanks too?

The percolator finished bubbling. Somehow, as I watched the earth drinking thirstily from the heavens, the French vanilla, which I was enjoying, seemed to take on an additional smoothness. After the storm had passed, I went outside into a new and refreshing coolness that kissed my skin and a fragrance that spoke no longer of dust and sweat.

Even this effort can be improved. You might feel that you could never write like this. The intention here is not to get you to write in this way but to rise to the challenge of overcoming bland, uninteresting writing while also developing your own style. Observation, the employment of all your senses, and much practice will eventually produce a descriptive essay that will receive an excellent grade. If you are aspiring to be a writer, you should practice the art of description in all your writing.

See “How to Write a Description/Descriptive Essay” on You Tube

What is your experience with descriptive essays? Do you have any useful insights? What are your particular struggles? Do you have any favorite authors who are so good at description that you feel you are right there in the scene they are describing? Your comments, observations, and questions are welcome.

Here are more articles to help you with English words, grammar, and essay writing.

In the tab bar, click on ESSAY WRITING, GRAMMAR, WORDS, and SELF HELP for links to all the articles on this website and to related items on other websites.

How to use Son of Citation Machine

How’s Your Logic? Play This Game

Don't Fallacy Me: Don't Fallacy Me is a free, collaborative, multiplayer mind game! It provides an example, and you select the clearest logical fallacy. A fallacy is, very generally, an error in reasoning. This differs from a factual error, which is simply being wrong about the facts.